The Glenn Miller Orchestra Scandinavia, located in Stockholm, Sweden, started to operate July 1st 2010, with permission and authorization from Glenn Miller Productions, Inc., New York, U.S.A. Its band leader is Jan Slottenäs; former leader of a band under his own name. GMO, Scandinavia operates in Sweden, Norway, Denmark and Finland.

Early in 2010, after several years of negotiations, Glenn Miller Productions, Inc. offered Jan Slottenäs the opportunity to acquire a license of the names "Glenn Miller" and "Glenn Miller Orchestra" in Scandinavia, including Finland, from July 1st of the same year. This resulted in Jan, who was in the middle of arrangements for his own band´s 25th anniversary, immediately travelling to New York to meet with David Mackay, JR, CEO of Glenn Miller Productions, Inc. The agreement was signed on March 12, 2010. 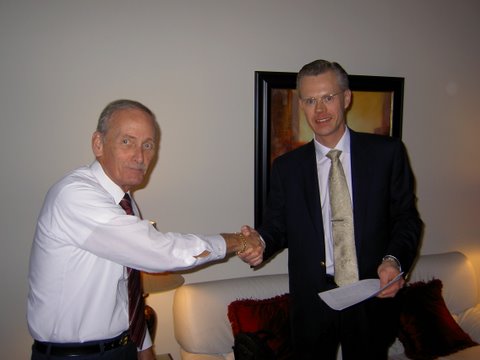 Jan´s band, under his own name (also specializing in Glenn Miller´s music) became famous for playing as close to Glenn´s original sound as possible. Jan´s intention is to maintain that line with the Glenn Miller Orchestra Scandinavia.

The Jan Slottenäs Orchestra became known globally as one of a few top bands in the world that played Glenn Miller´s music. To Jan it is important to play each chart exactly as the composer/arranger and Glenn himself meant it to be performed; "There is a kind of liberty in the solo parts although the soloists are always subordinate to the ensemble playing. It is also important to let the vocalists, who mostly sing the refrain, use their own personalities in their voices. At the same time, it is important that the listener experiences the vocalist's voice as "one voice among all the others" in the orchestral arrangement." Jan´s opinion is that it´s up to the listener to speculate about how Glenn Miller might have developed his music. But he promises the Glenn Miller fans to lead Glenn Miller Orchestra Scandinavia in a way that will be recognizable to the audience.

All band members are very highly qualified and Jan strives to capture the feeling of a young and fresh band performing with high class. While singer Jens Berggren is announced as "the young man from the romance department", the Moonlight Serenaders consist of four young guys with a background in Barbershop harmony. Samuéla is the band´s lone female singer who, on occasion, sings with two of her sisters, Paula and Izadora - together they form The Adam Sisters.

The band members are all free-lancers, so substitute players and singers are used from time to time. Jan understands the advantages of having versatile musicians and; therefore, encourages his musicians to play other kinds of music. There are several very skilled musicians standing by, ready to fill in for the permanent members when necessary.

Jan about himself; "I don´t see myself as a star trombonist, but I certainly know what it takes to make a good band swing and play Glenn Miller´s music."

1985 Jan Slottenäs establishes his own band at age 15.

1994 Jan Slottenäs produces the first concert with his band in the Stockholm Concert Hall, "A Tribute To Glenn Miller" - 90th anniversary. One of the guest artists is Peanuts Hucko, former musician of Glenn´s army band.

1999 JSO plays together with musicians from the Royal Philharmonics at the Stockholm Concert Hall, "A Tribute To Glenn Miller". Once again Peanuts Hucko is invited as a gust soloist, and his wife, singer Louise Tobin, is also along on the tour.

2001 JSO releases its second CD, "A Tribute To The Great Big Bands". Soloists are Putte Wickman, clarinet and Jan Lundgren, piano. This was a live CD recorded from concerts when the band played pieces from several of the most famous big bands during the big band era. A video is produced for Swedish television from a dance evening at Nalen in Stockholm. The program is never broadcast. Participating is also Putte Wickman.

2003 JSO releases its third CD, "In The Glenn Miller Mood"

2004 JSO goes on tour to the U.S.A. They visit Glenn Miller´s birthplace in Clarinda, Iowa, and The Glenn Miller Festival for Glenn Miller´s 100th anniversary. Several tribute concerts are played in Sweden and in Norway and for the second time the band works with strings - in Stockholm, Malmoe and Gothenburg. Recordings from these concerts are put on the band´s fourth CD, "A Tribute To Glenn Miller & The Army Air Force Orchestra". A VHS is produced of the unpublished TV program from Nalen from 2001.

2007 JSO releases its sixth CD, "Jan Slottenäs Orchestra LIVE" and makes a second trip to the Glenn Miller Festival in Clarinda. Guest artists with the band in Clarinda are Norman Leyden and Jan Eberle. JSO also tours with Antti Sarpila and Lars Erstrand.

2009 A seventh CD is released; "Glenn Miller´s music played live by the Jan Slottenäs Orchestra". JSO plays in Estonia at the end of a long tour of Sweden and Finland, and for the third time works with strings - in Stockholm, Malmoe and Gothenburg.

2010 JSO celebrates its 25th anniversary and the eighth CD is released, "25 Years with the Jan Slottenäs Orchestra playing In The Glenn Miller Mood". Jan receives a proposal from Glenn Miller Productions, Inc., which results in the end of JSO and Jan becomes leader of the Glenn Miller Orchestra in Scandinavia.

Operations with the Glenn Miller Orchestra, Scandinavia starts in public from 1 July and the first performance takes place at the Jazz Museum in Strömsholm, Sweden on 28 August. The Band tours Sweden and Norway during autumn and winter. Jan receives the 2010 year´s culture scholarship from Salem Municipality.

2011 GMO, Scandinavia makes studio recordings for a CD. The CD is released same spring. The Band tours all the Scandinavian countries; Denmark, Sweden, Finland and Norway.

2012 The GMO tours all the Scandinavian countries. Through a new agreement with the Glenn Miller Productions, Inc., starting on 1 July, France is now also included to the band territory. Special tribute concerts are performed saluting several of the greatest big bands during the big band era. A live-CD is released during the autumn with recordings from 2011 and 2012.

2013 The Band pays public attention to its third year as the official Glenn Miller Orchestra of Scandinavia, and plays special tribute concerts saluting Glenn Miller´s Chesterfield Show, also including The Adam Sisters who are singing some of The Andrews Sisters´ songs. The GMO plays in Sweden and Denmark and makes a first tour of France. The Band starts a cooperation with several dance cruises onboard the M/S Viking Cinderella between Stockholm and Mariehamn.

2015 A deep recession seems to have presented in interest of the Miller music. It is doubtful wheter the band can continue operating beyond the year end. France is removed from the band territory. A video is recorded at the Concert Hall of Västerås on 25 April. A DVD is released during the summer. GMO, Scandinavia continues operating to the end of the year and finally reaches a possibility of extension. New dance cruises are made with M/S Viking Cinderella. Jan receives the Harry Arnold Scholarship "for have been working with his big band during the past 30 years".

2016 The dip of interest in Miller´s music leads to fewer commitments during the spring. However, GMO, Scandinavia is able to increase its performances the second half of the year and ensures possible continuation of operations during the next year. New dance cruises are made with M/S Viking Cinderella.

2017 GMO, Scandinavia plays a new concert series "A Tribute To The Great Big Bands" in Sweden, this time featured music from 14 of the greatest big bands during the big band era. New tours are made in Norway and Denmark. The Orchestra releases its fourth CD, "Solid As A Stonewall" and makes new dance cruises with M/S Viking Cinderella.

2018 The world-renowned orchestra with the unique jazz sound features an awsome show in a cavalcade of hits, evergreens and surprises at high pace, where nothing is predictable, but all answeres are nevertheless given. The show is called "Swing Is The Thing!" and is played on several venues in Sweden. GMO, Scandinavia also tours Denmark and Norway and makes new dance cruises with M/S Viking Cinderella.

2019 A new dance cruise is made with M/S Viking Cinderella at the beginning of the year. The year continues with special concerts in Sweden and Norway in tribute to Glenn Miller whose music has now been played by his own orchestra worldwide for 75 years after his loss:

In one part, a concert series is played, “A Tribute To The Music”, during which Jan Slottenäs and the orchestra explain and describe the so-called Miller sound, the design of the music, the origin and construction of the sound as well as explain its success.

The fall season begins with a dance performance at HågelbyParken, Tumba, and then continues with the two concert series around Sweden before the annual Christmas tour begins. In connection with the Christmas Show, a fundraiser is being held at all venues for the Red Cross' relief work in the event of world disasters.

2020 GMO plays a new dance cruise onboard M/S Viking Cinderella in January. In February, the orchestra plays a concert at Ludvika Folkets Hus. Shortly afterwards, the first cases of Covid-19 in Scandinavia are discovered. Denmark closes the border and imposes restrictions, which means that the orchestra's tour of Denmark in early April must be canceled. Somewhat later, restrictions on the audience of a maximum of 500 people will be intrduced in Sweden. GMO plays for a permitted audience at Kalmarsalen on 15 March. Shortly afterwards, a new maximum limit of 50 people will be introduced, which will apply "until further notice", which is why all concerts during the spring have to be cancelled. The orchestra's existence is now being jeopardized and Jan Slottenäs decides to cancel all engagements for the rest of the year.

free Joomla templates
Back to top