Even after nearly 80 years since Glenn Miller's disapperance, his musical arrangements are still heard around the world! 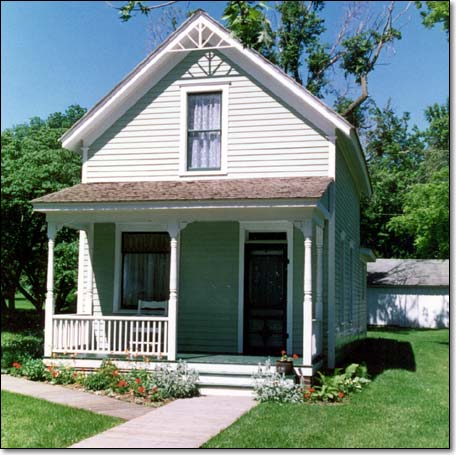 Alton Glenn Miller was born in Clarinda, Iowa on March 1, 1904. He was the second of four children raised by Lewis Elmer and Mattie Lou Miller. But it was in North Platte, Nebraska, several years later that Glenn actually got his musical start when, one day, his father brought home a mandolin. At the age of 13, when Glenn had raised enough money from milking cows, he promptly traded the mandolin for an old, battered trombone he bought. He practiced at every opportunity. In fact his mother worried, "It got to where Pop and I used to wonder if he´d ever amount to anything".

In 1923, Glenn went to the University of Colorado, although he spent more time travelling to auditions and playing wherever and whenever he could. After flunking three of his five courses one semester, Glenn dropped out to concentrate on his career as a professional musician.

He toured with several orchestras and ended up in Los Angeles where he landed a spot in Ben Pollack´s group, a band that included a guy named Benny Goodman. Here, Miller also got the chance to write some arrangements. Arriving in New York City, he soon sent for, and married his college sweetheart, Helen Burger, in 1928, and for the next three years, earned his living as a free-lance trombonist and arranger.

Miller played and recorded with the likes of Tommy and Jimmy Dorsey (who, on several of their records, featured an up-and-coming singer by the name of Bing Crosby), Gene Krupa, Eddie Condon and Coleman Hawkins. Also, during that time, Glenn cut 18 sides for Goodman, and worked for radio studio conductors like Victor Young, Carl Fenton and Jacques Renard. In 1934, Miller became the musical director of the Dorsey band and later went on to organize The Ray Noble Orchestra, which included such players as Charlie Spivak, Peewee Erwin, Bud Freeman, Johnny Mince, George Van Eps and Delmar Kaplan, among others.

In April 1935, Glenn Miller recorded for the first time under his own name. Using six horns, a rhythm section and a string quartet, he recorded "Moonlight on the Ganges" and "A Blues Serenade" for Columbia. But selling only a few hundred records, they couldn´t be described as a runaway success, and so Glenn continued his position with the Ray Noble Orchestra.

In 1937, Glenn Miller stepped out to form his own orchestra. There were a few recordings, (one for Decca and one for Brunswick) a couple of week-long stints in New Orleans and Dallas, and many one-nighters, but it was not to be. Though the group would play one more date several days later in Bridgeport, Connecticut, Glenn gave his men their final notice on New Year´s Eve at the Valencia Ballroom in York, Pennsylvania. Broke, depressed and having no idea what he was going to do, he returned to New York City.

It is said that Glenn Miller could never remember the exact moment he decided to emphasize his new reed section sound. But it was during this disheartening interim, that he realized the unique sound, (an old idea he had discovered already when arranging for Ray Noble) produced by a clarinet holding the melodic line while a tenor sax plays the same note one octave lower and is supported harmonically by three other saxophones. The specific sound became the Miller band´s trademark; an easily recognizable style that would set his band apart from all the rest.

Formed in March of 1938, the second Glenn Miller Orchestra (which would later include the likes of Tex Beneke, Marion Hutton, Ray Eberle, Paul Tanner, Johnny Best, Bobby Hackett and Billy May) soon began breaking attendance records all up and down the East Coast. At the New York State Fair in Syracuse, they attracted the largest dance crowd in the city´s history. The next night they topped Guy Lombardo´s all-time record at the Hershey Park Ballroom in Pennsylvania. The Orchestra was invited by ASCAP to perform at Carnegie Hall with three of the greatest bands ever; Paul Whiteman, Fred Warring and Benny Goodman, and created more of a beat than any of them. 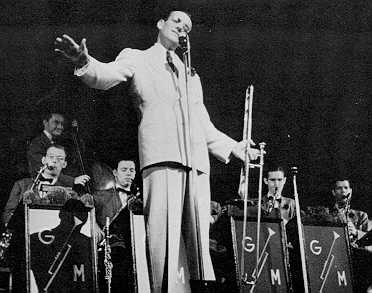 In just four years Glenn Miller scored 23 number one hits - more than Elvis or the Beatles!

There were record-breaking recordings such as "Tuxedo Junction", which sold 115,000 copies in its first week, "In The Mood", and "Pennsylvania 6-5000", all appearing on the RCA Victor Bluebird label. In early 1940, Down Beat Magazine announced that Miller had topped all other bands in its Sweet Band Poll, and capping off this seemingly sudden rise to the top was Glenn Miller´s "Moonlight Serenade" radio series for Chesterfield cigarettes which aired three times a week over CBS. 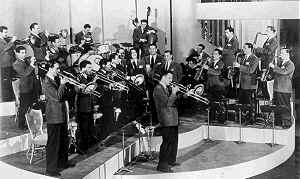 In 1941 it was off to Hollywood where the band worked on its first movie, "Sun Valley Serenade", which introduced the song (and soon-to-be million-selling record) "Chattanooga Choo-Choo", and featured the Modernaires and the Nicholas Brothers. 1,200,000 copies of "Chattanooga" sold and for that recording Glenn received the first gold record in history, by Victor Bluebird Records, and at that time the gold record was made of solid gold! Next up was a movie called "Orchestra Wives", in 1942.

The war was starting to take its charge on many of the big bands as musicians, and the rest of the country´s young men began receiving draft notices. Glenn made up his mind after the Pearl Harbour attack, December 7, 1941, that he would apply for duty. On October 7, 1942, Alton Glenn Miller reported for introduction into the Army and was immediately assigned to the Army Specialist Corps. He was made a Captain and later promoted to Major. It took Glenn many months of convincing the military higher-ups that he could modernize the army bands and ultimately improve the morale of the men. Miller was named director of bands for the Technical Training Command and helped organize a number of bands before receiving permission to form his own. His training complete, he was transferred into the Army Air Corps, where he ultimately organized the Army Air Force Orchestra. 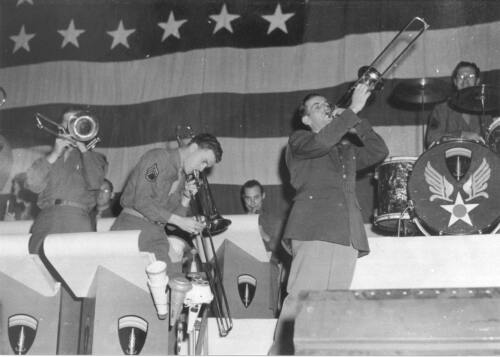 Glenn wanted to add stringed instruments to his band in order to "transcend the conventional sound of a dance band". In November of 1943, Miller was released from his other responsibilities leaving him free to concentrate on the development of his own band. After repeated requests, Miller received permission to take the band overseas and in June 1944 the Miller sound was heard "live" in Britain. 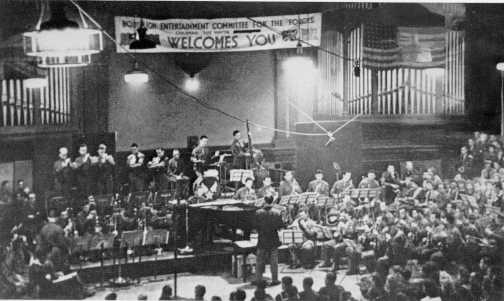 In less than one year, Glenn Miller and the American Band of the Allied Expeditionary Force were engaged in over 800 performances. Of these, 500 were broadcasts heard by millions. There were more than 300 personal appearances including concerts and dances, with a gross attendance of over 600,000. But Glenn was not to participate in the final six months of these activities.

In the fall of 1944, the band was scheduled to be sent on a six-week tour of Europe and would be stationed in Paris during that time. Miller decided to go ahead, in order to make the proper arrangements for the group´s arrival. And so, on December 15th, Glenn Miller boarded a transport plane to Paris, never to be seen again.

Glenn Miller was posthumously awarded the Bronze Star in recognition of his contribution to the war effort.

Glenn Miller´s favourite author was Damon Runyon. His favourite book was the Bible. Spencer Tracy and Olivia de Havilland were his favourite movie actor and actress. His passions were trout fishing, playing baseball, listening to good music, sleep and money. His pet peeves were bad swing, early-morning telephone calls (he liked to sleep from 4 a.m. to noon), and the phrase "goodbye now". His favourite quotation, one he stated, was not from the Bible, nor from Runyon, but from Duke Ellington: "It Don´t Mean a Thing If it Ain´t Got that Swing!"

free Joomla templates
Back to top